The game has 3D graphics, but I'll use 2D images for mock-ups. I wondered what style to used: 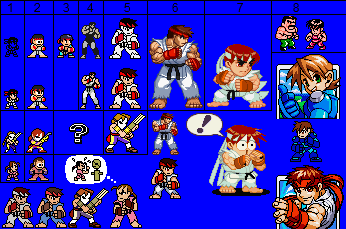 I specially liked 1, 2, 3, 5, and 8, so I will be using them (specially 2 as I'm biased, it's easier, is used for several franchises, and may make sheets to submit to Sprites Inc). Note that I may not do all sample images with sprites as detailed as this sample, maybe even doing some black and white sprites and using mixed styles.

As mentioned in the main page, the game uses the Modular Game Engine, with additions for this game. Some of the default settings may change depending on how the prototype plays.

The basics are in the main Capcom World page and in Modular Game Engine. Here I'll cover specifics in more detail.

On multiplayer, each player controls only one character (or more). Offline multiplayer is limited to 4 human players in one system (and 16 CPU players if all players agree to have CPUs), with the screen being divided for each amount, with horizontal and vertical split screen options. Online can have up to 20 players fighting each other, depending of the game mode, and resembles games like Jump Ultimate Stars, Super Smash Bros., Team Fortress 2, Overwatch, ...

The character and stage selection is divided by series. 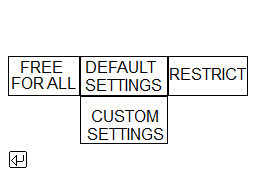 With an offline/online display and option in the bottom left.

Each of the options above have the following options:

Retrieved from "https://dwn009.fandom.com/wiki/Capcom_World/Notes?oldid=7193"
Community content is available under CC-BY-SA unless otherwise noted.