While it isn't my favorite type of game (I only have it because of the Mega Man characters), I'd say that (compared to other mobile games) it's above average and is at least worth a try. Good graphics, good music, a (somewhat) light and fun story, ...

However, the Team interface is a bit bad compared to other games. Should not a game with loads and loads of characters have a (usable) scrollbar to help navigate through them instead of only having it as an indicator? More sorting options would also be good, specially one to sort by name and stats.

It would also be good to have the "Auto" option always available instead of only having it in stages that were completed.

As of June 2018, the team menu sorting and filter are:

Some of the event only characters. All Mega Man characters have upper case names in the game. 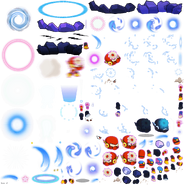 Retrieved from "https://dwn009.fandom.com/wiki/LINE_Rangers?oldid=7319"
Community content is available under CC-BY-SA unless otherwise noted.