(One of the three descriptions appear in the opening scene)

(Select one of the 10 types of characters to be the Auto Brother.)

It is the year 220X...
Owing to the rapid advances in Wave technology, people are able to enjoy a life of ease and convenience.
Geo Stelar is a 5th grader who lives in this future society.

(Geo appears in the screen)

Geo lost his father in an accident a few years ago.
The shock he felt at the loss caused him to rarely leave his room.
Then one day, something quite unexpected entered young Geo's life.
That thing was...
An alien with an electromagnetic (EM) body.

The alien was called Omega-Xis, and he had an offer for Geo.
"I'll tell you about your father if you let me use your body, kid!"
And then...
The shy Geo and the aggressive alien merged together, and a new hero was born!
Known as... MegaMan!

As fate would have it, the birth of MegaMan coincided with a dangerous threat to Earth.
Aliens known as FM-ians launched an attack on Earth.
With Earth's fate in the balance, MegaMan stood against the FM-ians!
MegaMan risked his life and battled to save Earth from the FM-ians!

Two months have passed since the battle with the FM-ians.

(Screen changes, showing Geo with a box in the Echo Ridge park)

(Geo uses his Visualizer, showing that he is talking with Omega-Xis)

(Game asks player to insert "Your Handle". Max. of 10 characters) 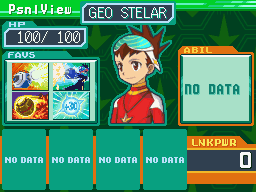 (Geo turns off the Air Display and looks around)

(He finds a young woman near the BIG WAVE shop)

(The player gains control over Geo for the first time. If he tries to leave the area...)

(If the player press the L Button)

(Geo talks with the woman)

(Later in the park) 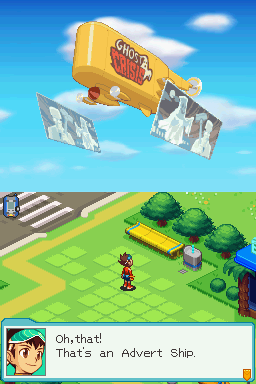 (Sparks appear around the Advert Ship)

Is that thing stable?

It's gonna hit us!

(Geo runs away, barely avoiding it as the screen fades)

(If the player press the L Button)

(Talking with the crowd)

(After talking with everyone)

The soundtrack is making a weird noise.

Aargh!! Wh-what is that noise?

(The crowd runs away)

(If Geo checks the Advert Ship)

(If Geo goes far away)

(If Geo goes to his house)

(Geo goes to the wavehole and changes into MegaMan)

(MegaMan walks a little, and Mega stops him)

(MegaMan talks with the Hertz)

(After talking with the Hertz, MegaMan goes to the Advert Ship)

(If players chooses "Yes", there will be dialogue during the battles. In the first battle...)

(If the player tries to run away after choosing "Yes")

(If the player tries to run away after choosing "No")

(If the player somehow manages to lose the first battle...)

(After the first battle)

(After the second battle)

(If the player makes MegaMan lose the second or third battles...)

(If MegaMan goes far away)

(If Geo tries to pulse in)

(Geo talks with his friends and Ere Mitic)

(Geo looks for the propeller, finding it above Luna's home)

(If Geo obtains a Battle Card)

(If Geo obtains a Star Card)

Retrieved from "https://dwn009.fandom.com/wiki/Mega_Man_Star_Force_2/Script?oldid=6443"
Community content is available under CC-BY-SA unless otherwise noted.