Note: Some text was taken from the HUD article in Wikipedia.

HUD (head-up display) is the method by which information is visually relayed to the player as part of a game's user interface. The HUD is frequently used to simultaneously display several pieces of information.

The main default HUD (this sample being for 352x264 pixels or higher, 287x248 if ignoring the bleeding and mugshots) options: 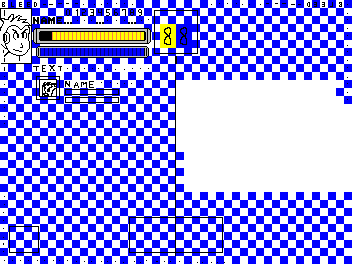 Top right: Boss side / 2P side - Same graphics (but different data) as 1P side, but inverted, except of course of texts. (stxet detrevni wohs ot doog eb ton dluow)

Other default HUD option, this one being more simple: 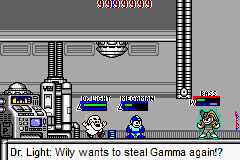 Name, HP, and MP are displayed above each character's head, and the player can remove them if he prefers. The two gauges have a size of three tiles. For multiplayer, they also have an extra detail to show the team's color or a mark, or both if the maker prefers.

Score (off by default) is in the top center of the screen.

Text is displayed in the bottom left.

Retrieved from "https://dwn009.fandom.com/wiki/Modular_Game_Engine/Interface?oldid=7198"
Community content is available under CC-BY-SA unless otherwise noted.