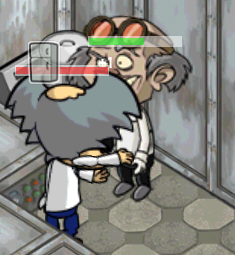 Zombie Cafe is a mobile game. This page only covers the Japanese version and Capcom-related content. Go to the Zombie Cafe Wiki for more stuff.

Note that all times below are from Japan's time zone.

"Free Wily" for newcomers that reach level 3 during the event (during part 1-2, ended during part 3).

Offer
Add a photo to this gallery

Players face an enemy cafe contains Met employers and a Mac as chef.

They have a chance to obtain:

Cafe
Add a photo to this gallery

Difficulty 4 & 5: Wily themed
Add a photo to this gallery

Gacha Zombie X and X (Full Armor) are added to the Gacha, and the player gains one free try without need of Toxin. Also, it seems the chance to obtain them will be higher on May 4-5?

Besides the set rewards, the player has a small chance to obtain a zombie at the end of the level. VAVA is only dropped on Lv. 16 onwards, Sigma on 26+, and an unknown one in the final level. If the player could not gain Iris and Dot Rockman in the previous two parts, they will have one last chance to get them from May 7, 12:00 to May 8, 11:59, when they may be dropped on Lv. 21+.

On June 15, 2016, the Rockman decorations from previous events (excluding the "boss shutter pillar" from the 2014 event, which was replaced by broken enemies) became available for purchase. Except for Rush, all have the same description.

Point event. Get points to trade for characters:

Besides the set rewards, the player has a small chance to obtain a zombie at the end of the level: A bronze Hato can be gained on any level, Mac on Lv. 10 onwards, and Over-1 on 26+. On August 13, Iris and Black Zero may be obtained on lv. 21+.

Retrieved from "https://dwn009.fandom.com/wiki/Zombie_Cafe?oldid=6986"
Community content is available under CC-BY-SA unless otherwise noted.